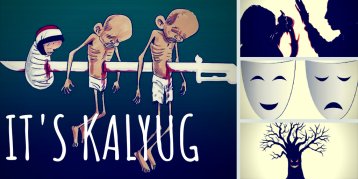 The era of Kaliyug

Do you know the meaning of the word ‘Kaliyug’? What forecasts have been made about Kaliyug in the Mahabharata age; and what would be the circumstances in the Future? Do you know that Lord Krishna asserted detailed information to Pandavas about Kaliyug?

What’s astonishing is to observe that all such forecasts are absolutely True in the context of current age!

Do you know which phase of the Kaliyug we’re living in? What forecasts were drawn thousands of years ago; and how would the Future turn?

Kaliyug has begun approximately 5,000 years ago. It’s believed that the duration of Kaliyug would continue for 4,32,000 years. We’re merely in the First stage of Kaliyug and 4,27,000 years are left from now.

Now, let us tell you what were those 10 Forecasts about Kaliyug; which would surprise you!

First, it is suggested that humans in Kaliyug would be distant from Mother – Nature. He / She would badly use the natural resources for His / Her benefits. Towards the end of Kaliyug; such status would come, when crops won’t grow. Mother Earth would turn Barren. There won’t be flora – fauna. Cows would stop giving milk. The temperature of Earth would be unbearable Hot. People would helplessly stare at the clouds; longing for the Rains in vain.
Towards the end of Kaliyug; Ganga river would be dry and would turn to Baikunth Dhaam! All Gods – Goddesses would leave the Earth!!

According to the Second Forecast; human’s age would be very less. Quality of life would decline. As the forecasts say, the age of human beings would remain 20 to 30 years merely. It’s mentioned that people would be old at the age of 16; and would die at 20 merely! Youth would come to an end. People would be shorter and weaker.

Thirdly; society would have No Humanity. We would not find Positive Characteristics like Trust / Mercy / Forgiveness in societal surroundings. All being would be entirely Self – Centered. Humanity would remain as a word only.

Fourth Criminal activities would be high. One would loot the other. Society would be violent in Kaliyug. Ironically, Powerful people would rule others. There won’t be good deeds, or actions. People with a criminal mindset would lead the society.

Fifth Forecast states; Veda – Puranas and other religious scriptures would lose the significance. Lies would take place of Truth. Tendencies of anger / greed would increase. There would be No Sanskar [Values]. Morality would remain a word merely. Human beings won’t indulge in purified actions. People would go forward through manipulating; and fabricating the facts. Lives would be filled with Sins.

Sixth Relations would lack Honesty. It’s written about Kaliyug; that even Father – Son would behave badly against each other and won’t hesitate to turn even violent. Sons won’t even feel hesitant while hitting Parents. Brothers would turn bitter for each other. Close relationships would not remain sweet. Those would be led by either Greed or Fear. The pure feeling of Love would have vanished from the society.

According to the Seventh Forecast, Marriage won’t be considered sacred. Faith in Marriage would decline. There won’t be tendencies to make adjustments in marital relationships. Husband and Wife would try to dominate each other. Bitterness would be high. Divorces and Separations would increase.

The Eighth Forecast asserts that wastage of money would increase. Habits to Save and Donate would go down. People would be extravagant and it would be developed as a habit.

According to the Nineth Forecast; Leisure and Luxury would incline. All would focus upon materialistic achievements. Lives would be deprived of Mental PEACE. Every household would be filled with Conflicts. Depression and Tensions would be high. Human beings would concentrate upon External Things.

The Tenth Forecast mentions that rare people would be healthy. Diseases would be more, even at a young age. Nobody would be bothered about purification of bodies. All would eat without taking bath; and worshipping God. Humans would Die Untimely.

Regarding the End of Kaliyug, it’s mentioned in Mahabharata that the age would end with a Pralay. Though it would not a Jal [Water] Pralay, but would happen because of the highly increasing temperature of Earth!

We find descriptions of fatal Storms / Earthquakes and Natural Calamities towards the end of Kaliyug. Several parts of the Earth would turn Infertile. Untimely deaths would take place.

Despite all the disastrous events; it can’t be said that anything good or positive won’t take place after Kaliyug. We find clear mentions about the end of Kaliyugin Shri Madbhagvad Puran and Bhavishya Puran. Forecasting states that Lord VISHNU would appear in the form of Kalki Avtar; to end the evil. Thus, religion would re – established in the society.

May the Goodness WIN!